Home → The Orders → Order of James I of Aragon

Order of James I of Aragon

The Royal Order of James I of Aragon

The Royal Order of James I of Aragon is the third in order of seniority (after San Salvador and the Balearic Crown, see previous Bulletins) of the honorific Orders of Chivalry in the gift of the Crown of Aragon. Traditionally it rewards faithful supporters of the Royal House and other such deserving persons for the contributions they have made to the preservation of spiritual values or in other fields of human activity. 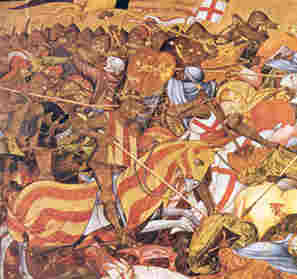 James I The Conquerer

Conception of James I

The Order takes its name from James I The Conqueror, the most noteworthy of the Kings of Aragon for a wide variety of reasons. James inherited the Kingdom of Aragon and County of Barcelona from his father Peter II and the Lordship of Montpellier and surrounding territories from his mother Marie of Montpellier. He was conceived when his father was tricked by courtiers into sleeping with his own wife, rather than any other woman. His mother then lit twelve candles and named them after the Apostles vowing that her son would take the name of the candle that lasted longest, which turned out to be Saint James appropriately known as the Apostle of Spain. In 1213 he ascended the throne at the tender age of 5 and he ruled until the age of 68, the longest rule of any Iberian monarch to date. During his reign he effected by conquest the dramatic extension of the Lands of the Crown of Aragon by Languedoc to the North, Valencia to the South and the Balearic Archipelago. Under James Aragon dominated the entire western Mediterranean. As a legislator he was a supreme issuer and codifier of laws, especially covering maritime trade. He wrote his autobiography, the Llibre dels Fets (the Book of my Deeds), which is still very well worth the read. He was a significant builder, most notably the cathedral of Lleida (Lérida), a great patron of learning being principally the promoter of the university of Montpelier and also Valencia. He was passionately interested in religion, promoting public debates between Catholic theologians and rabbis (with the undisguised intention of converting the Jews). By his three legitimate wives (ignoring several mistresses who produced offspring) he had numerous children. When the descendants of his first two wives died out, by his Will of 21st August 1261 still in the Archive of the Crown of Aragon in Barcelona, the heirs to the throne are the children and further descendants of his third wife Teresa Gil de Vidaure. However, by this time the force of arms had intervened in the person of the heir to Castle & Leon and the Lands of the Crown of Aragon had been subsumed into what became modern Spain. Those descendants of Teresa Gil are to be found today in the House of Paternò Aragon Ayerbe headed by our Grand Master. 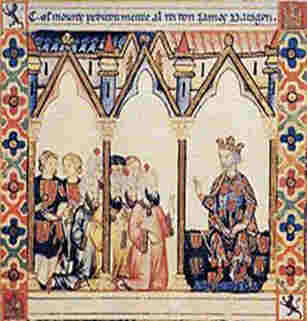 James I receives a Moorish delegation 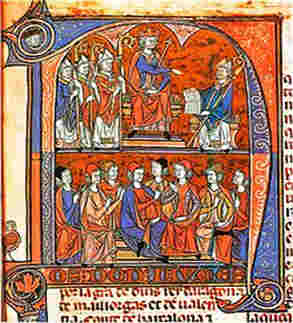 The insignia of the Order consist of the Cross of Santiago (St James the Apostle) and is technically termed a cross fitchy (ending in fleur de lys) but the lower limb is pointed as if a sword commemorating various miraculous interventions of St James in battle to assist the Christians to drive out the Moors. The Cross is red to commemorate Our Lord’s Passion but also the blood shed by St James at his martyrdom. 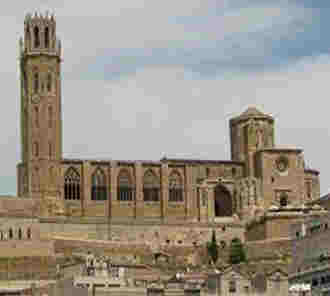 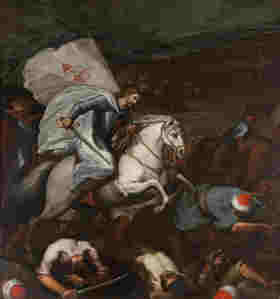 The Royal Order of James I of Aragon (hereinafter “the Order”) perpetuates the tradition of the Catalan-Aragonese Empire and the memory of the great King James the Conqueror. It came about for the purpose of rewarding faithful supporters of the Royal House of Aragon and such other persons who may deserve recognition for the contributions which they have made to the preservation of spiritual values or in the various fields of human activity.

The Knights of the Order belong to one single class, consisting of the following ranks:

The Order may also be conferred on Dames.

Awards of the Order are the exclusive privilege of the Grand Master on the proposition of the Grand Chancellor or of the Governor of the Royal House.

The insignia of the Order and its emblem are one and the same, namely a cross patty fitchy Argent enamelled transparent carmine. If the decoration is worn as a star it is placed on the left side following the Military Order of the Collar, when also worn.

Matters of discipline concerning members of the Order are referred to the Court of Honour instituted by the Military Order of the Collar.

Full powers of amendment and omission are reserved to the Grand Master.